A brief overview of the recent history of post-16 education helps us understand how we got from there to here, the challenges ahead of us and some thoughts on some possible solutions.

GCE A-Levels were first sat in 1951 were originally graded at a pass or fail or distinction.   In 1963, the government introduced a five grade scheme with quotas for the allocation of grades: 10 per cent of candidates would receive an A grade, 15 per cent a B, 10 per cent a C, 15 per cent a D, 20 per cent an E, and a further 20 per cent would receive an O Level pass.  This ‘gold standard’ persisted until the 1980s when educationalists began to voice concerns about the narrowness of the grade boundaries.  In the late 1980s, the O-level pass was replaced by a N or Near Miss grade.

The 1990s saw little change in the structure of A-level provision, although controversies surrounding grade inflation, breadth of curriculum and educational parity bubbled away, A-levels were still seen as the gold standard of educational school achievement.  AS levels were introduced but were not popular to begin with as teachers struggled with understanding the demands of this new half A-level.

Curriculum 2000 saw the first real challenge to the structure and philosophy behind A-level provision in over 50 years.  All A-level courses were to become modular split into AS and A2 with three assessment units.  The rationale was to introduce breadth as all Y12 students were to start on 4 AS levels as well as improve retention and achievement as there were concerns about students dropping out in Year 12.  The modular system was also designed to support the development of student confidence and skills as the AS questions were not as challenging as the A2 papers.

Inspired by European curriculum models, the 2005 Tomlinson Review proposed the scrapping of GCSEs and A-levels with their replacement by 14-19 Diplomas.  These proposals would end the academic and vocational divide as well as providing stretch, challenge and breadth in a 4 level Diploma system.  This was too radical a step even for a reforming Labour government who distanced themselves from this report and declared that A-levels were here to stay.  There were slight tweaks in 2006 and 2009 but this model remained in place for the next 15 years.  Some commentators continued to suggest that curriculum 2000 had caused grade inflation and the controversy took the scalps of both the Head of QCA and the widely respected Secretary of State, Estelle Morris.  Stretch and challenge was also a theme and the A* was introduced to improve provision.

By 2010, modular A-levels were seen as the prescription of a previous age, where the main preoccupations were of curriculum breadth and widening participation. 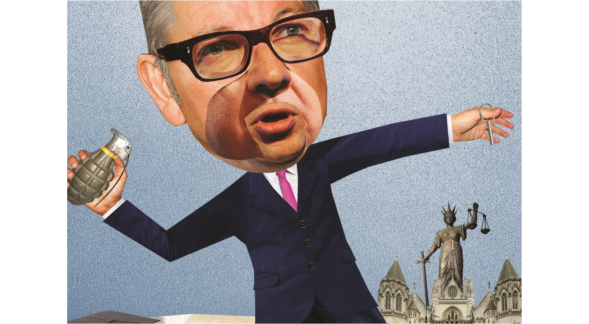 Enter Micheal Gove – the bête noir of the education establishment.  It is not that educationalists did not have concerns about A-levels, the last 60 years had been dominated by controversies surrounding standards vs grade inflation, breadth vs depth, challenge vs widening participation.  It is the way in which Gove entered these debates which can perhaps be viewed as all rather unnecessary.  According to Gove, children were being failed by the mob – the complacent, self-interested educational establishment.  He argued there were three groups holding back education – local authorities, unions, and universities who supplied teacher training (dominated by wooly-headed Marxist sociologists) and he was determined to break them all.

His answer was to liberate schools from local authority control in the creation of academies and free schools, liberate teacher training from the universities and redesign a more traditional curriculum.  The jury is still out on the efficacy of convertor academies and free schools – the evidence is mixed at best.  The unintended consequences of the slow death of university teacher training courses are yet to be felt, the quality of other routes into teaching remains quite variable.  Have we thrown the baby our with the bath water and irreparably severed the link between teacher-training and academic research?  However, it is his approach to curriculum and the speed of the reforms which landed the first blow.

Many educationalist would not disagree with the return of a knowledge-rich curriculum but Gove’s reforms smashed all the windows in at once, leaving his successors to sweep up the glass and board up the draft between rhetoric and reality.

1. Assessment will be mainly by exam, with other types of assessment used only where they are needed to test essential skills.

2.  AS and A levels will be assessed at the end of the course.

3. AS and A levels will be decoupled – this means that AS results will no longer count towards an A level, in the way they do now.

4. AS levels can be designed by exam boards to be taught alongside the first year of A levels.

5. The content for the new A levels has been reviewed and updated. Universities played a greater role in this for the new qualifications than they did previously.

I think the jury is still out on whether these reforms have created a better post-16 educational landscape.  Whilst there are always issues surrounding the implementation of new specifications, I still have the following queries about these changes:

These curriculum reforms have largely seen the death of AS.  The promises of being able to ‘nest’ the AS teaching alongside against the harsh reality of rising exam entry costs, worries about fitting in the content have led to a drift away from AS examinations as a stand-alone qualification.  Evidence from my own subject suggest that fewer and fewer centres are deciding to not enter students for the standalone AS qualification.  Does this mean most students are back to only studying 3 subjects at A-level?  Is this desirable?  What does the loss of AS grades do the the UCAS process?

2. End of ‘exam factories’?  I am sorry to say that it is a bit of a myth to suggest that these reforms have stopped the commodification of learning.  Students will still ask if the content is on the specification?  Furthermore, getting rid of AS has not magically given us an additional six weeks of learning as we must still prepare students for end of year assessments.  The school assessment treadmill carries on.  Lastly, students are still able to resit the exams following year if they do not like their grades (albeit, they will need to resit all three units).

3. More depth? In my opinion, the content of new specifications is not significantly smaller than in the old modular system.  In fact, the increased focus on synoptic links has arguably made them much more challenging in places.   I am not against challenging content per se but there is very little additional teaching time.  For example, in the AQA A-level Sociology specification only one topic was removed (suicide) and replaced with another. In AQA A-level Psychology, we are still racing through a topic every 5 weeks with little time to consolidate or review. This makes me worry, it is not good pedagogy to be so content-driven without time for reflection, review and retrieval practice.  The myth of extra time is a ghoul that looms large.

4. More teaching time? Most A-levels are resourced between 4 -5 hours per week.  The gained time from the abolition of AS levels is a bit of a myth as we still have to prepare students for end of year mock assessments and make time for feedback on those assessments.  By the time you add in the mock exams, work experience, INSET and review days you are not much better off.  There has been no increase in funding to sustain more contact time in the classroom.  Unless we address these systemic issues, I wonder whether this is more for less.

If we want depth and more rigour on a three A-level model, why not increase the contact time?  Although, Post-16 funding is labyrinthine at best even the most simplistic comparison between us and our colleagues in HE leaves makes you think what a good deal students get at A-level.  On the back of a napkin, students get 15 hours contact for 3 A-levels which attracts funding of around £2600 compared to a humanities or social science course at University which will have 8 – 12 hours contact a week and attract the tuition fee of £9250.  Now, I know it is more complicated than this and that the overheads in HE are more complex but you cannot help but think we provide more student contact much more cheaply.

This is clearly a loaded question, better than what? better for whom?  Putting these reforms in their historical context helps us see them as a response to over 30 years of moral panic and anxiety about A-levels.  Each set of reforms have played to a different gallery or pressing need of the day often without addressing the structural or systemic issues in post-16 education.

It is far too early to comment on whether these will have the desired outcomes.  Indeed, the challenge in education is foreseeing the long term implications of short term solutions and policy changes.

I still have much to reflect on in terms of how to adapt my pedagogy.  However, as a classroom teacher I am not yet convinced that these changes are producing ‘better’ learning or students who are more ready for university.  They are definitely more difficult as we have seen the grade boundaries soften this year to ensure comparable outcomes.  It is also ironic that one of the ambitions of a linear course was to create more ‘university-ready’ students who will progress onto the modular world of Higher Education.

We can and we will get better at teaching linear courses; I guess I am wondering who they are better for.  There are clearly a range of problems and challenges with their implementation.

Nonetheless, this might also be an opportunity for us to re-shape and embed the lessons of evidence-based practice and to start creating the type of learning that we want to see in our classrooms.  This is a real chance to revisit the ‘what’ and the ‘how’ and for this reason alone perhaps we should embrace the change and chance to have a clear out.

This site uses Akismet to reduce spam. Learn how your comment data is processed.